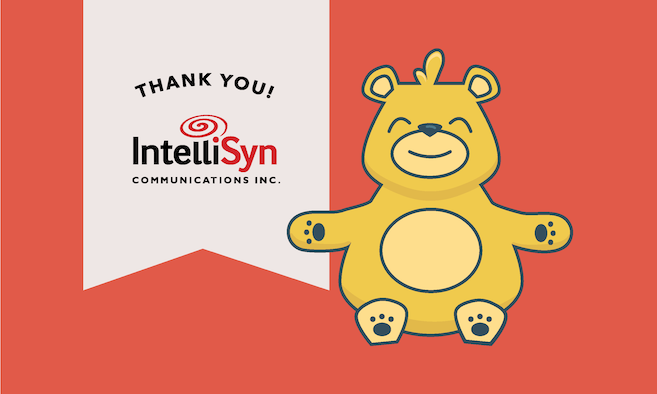 In early June, IntelliSyn launched a survey about the IT industry and IntelliSyn’s role in it. With each completed survey, IntelliSyn promised to donate $5.00 to the Children’s Hospital of Eastern Ontario.

Our survey process is complete and we received a great response, which has allowed us to make a donation of $250.00 to CHEO.

The survey asked participants to answer 10 simple questions, with the answers giving IntelliSyn insight into how the market views the IT industry.

One of the questions addressed the recent launch of IntelliShare, a customizable, managed enterprise file sync and share (EFSS) for secure access to business data from anywhere.

Participants who completed the survey were entered into a draw to win one of five $100.00 Amazon or Apple gift cards. The five winners were announced on June 6, 2017.

IntelliSyn would like to thank all of the participants who completed the survey. Your feedback is greatly valued. 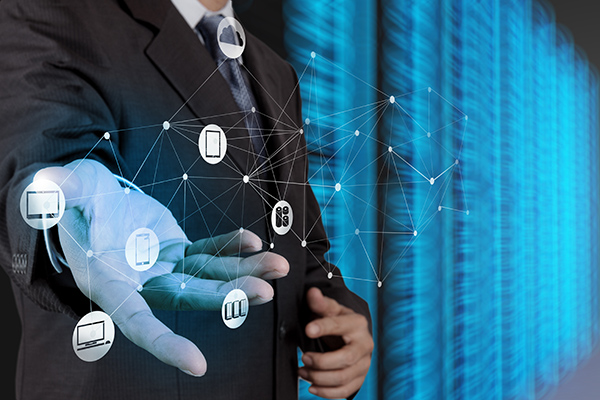 File syncing and sharing just got a whole lot easier with the launch of IntelliShare, IntelliSyn’s new file sync and share offering.

IntelliShare is a customizable, managed enterprise file sync and share (EFSS) solution that provides better performance and more control over file syncing and sharing compared to competitive cloud storage offerings. It enables secure, unrestricted access to business data from anywhere, so your employees can be more responsive to customers and more productive.

With IntelliShare, you will increase productivity and improve collaboration. It is engineered for:

And it is hosted in IntelliSyn’s secure cloud environment and customized to fit your unique business needs.

Contact IntelliSyn today to learn how IntelliShare can improve your business processes and to explore custom pricing options. 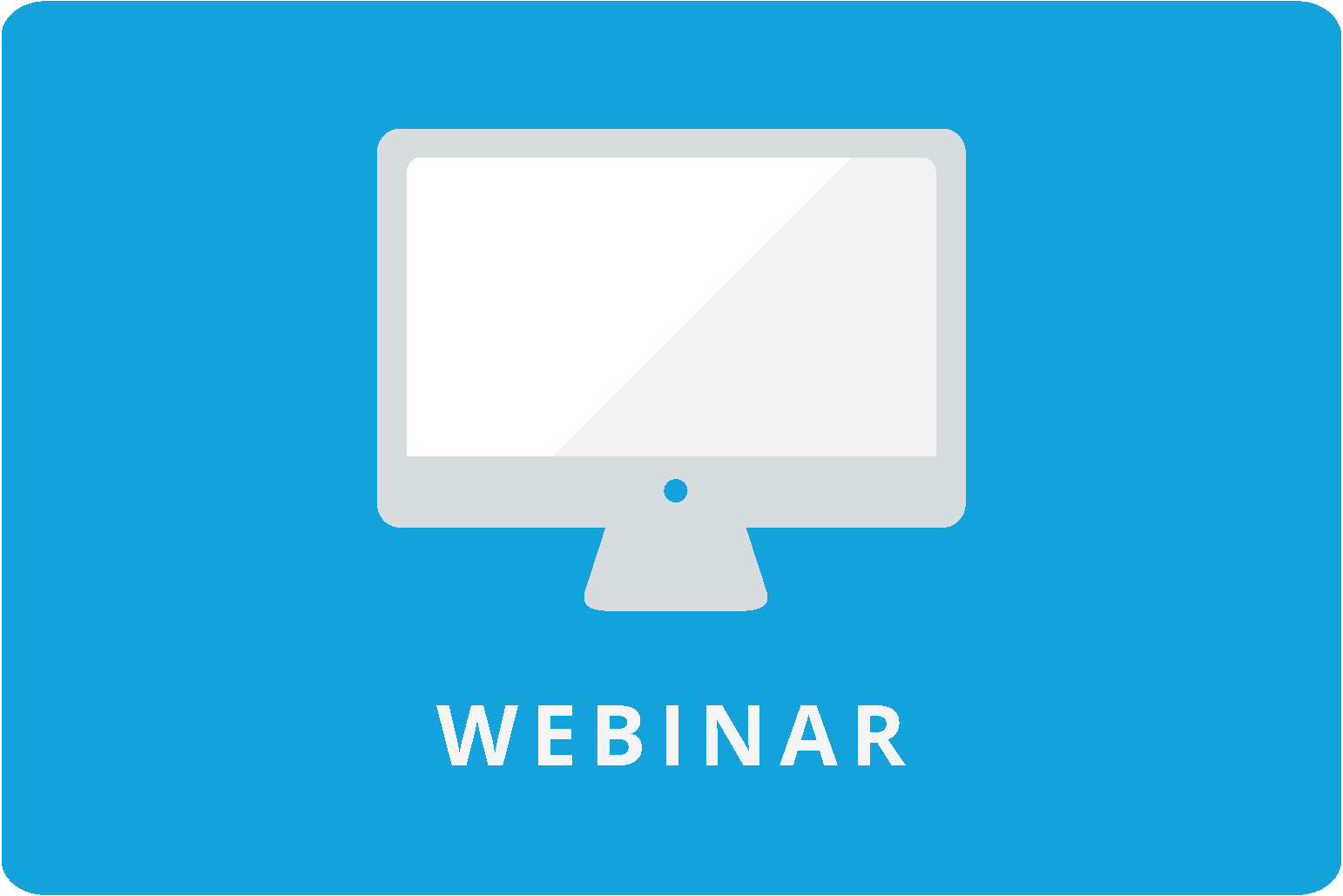 Be sure to catch up with Morris Jones, President of IntelliSyn U.S.A., as he hosts the first part of a webinar series on March 22 that addresses the basics of cloud solutions for small- and mid-sized businesses.

See the details, and register here.

Check Out Our New Ottawa Office!

We’re excited to finally be moved into our new office location in Ottawa!

In late 2016, it was decided that IntelliSyn HQ needed to start the following year off nice and fresh with a space fit exactly to its needs.

We encourage you to come by for a visit and a tour! 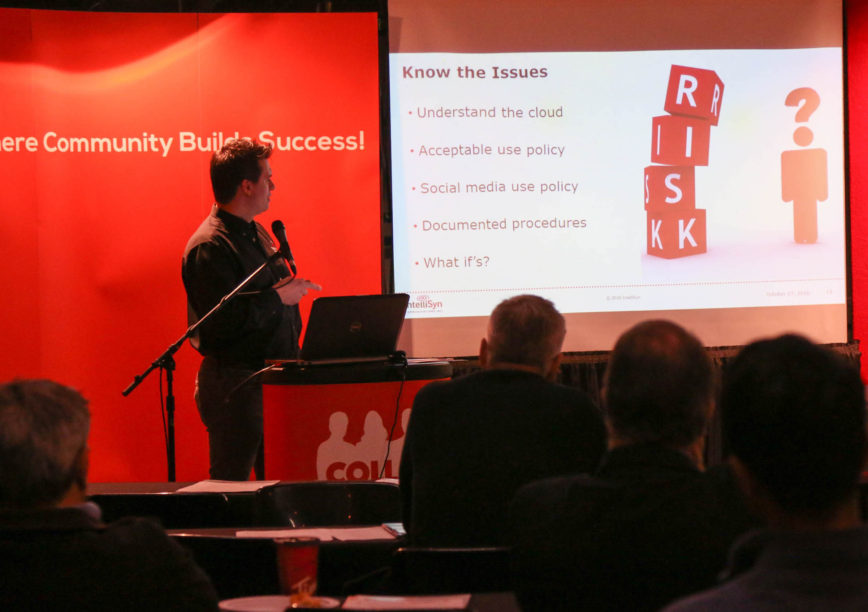 Over the past four months, Chris Stratton brought security expertise and insights to a variety of small businesses and associations through multiple speaking engagements.

At another exclusive roundtable event that closed off the year, Chris also spoke about how managed security service providers (MSSPs) help protect business IT networks from malware and other cybersecurity threats.

If you didn’t catch Chris this year, don’t worry! There will be more opportunities to attend IntelliSyn speaking events in 2017 and get insights into the IT issues that matter the most to small businesses. 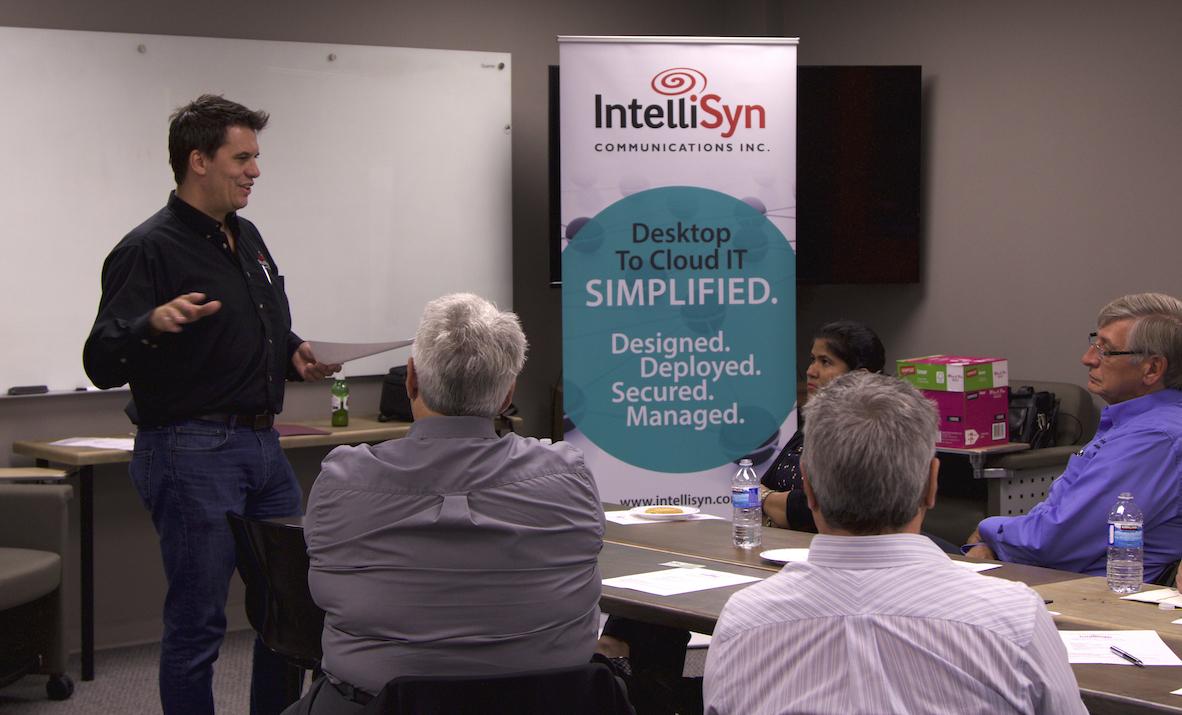 Chris Stratton, CEO and President of IntelliSyn, addressed a group of 10 specially invited business professionals and executives.
The session provided valuable insights into how managed security service providers (MSSPs) help protect business IT networks from targeted malware, customer data theft, and other cybercrime cost effectively. And it provided firsthand accounts from small business owners about how MSSPs have transformed their managed IT security and saved them money.

If you missed this event and want to be invited to the next one, contact IntelliSyn today.

You can also catch Chris speaking at an Small Business Association — Canada event on October 26th. 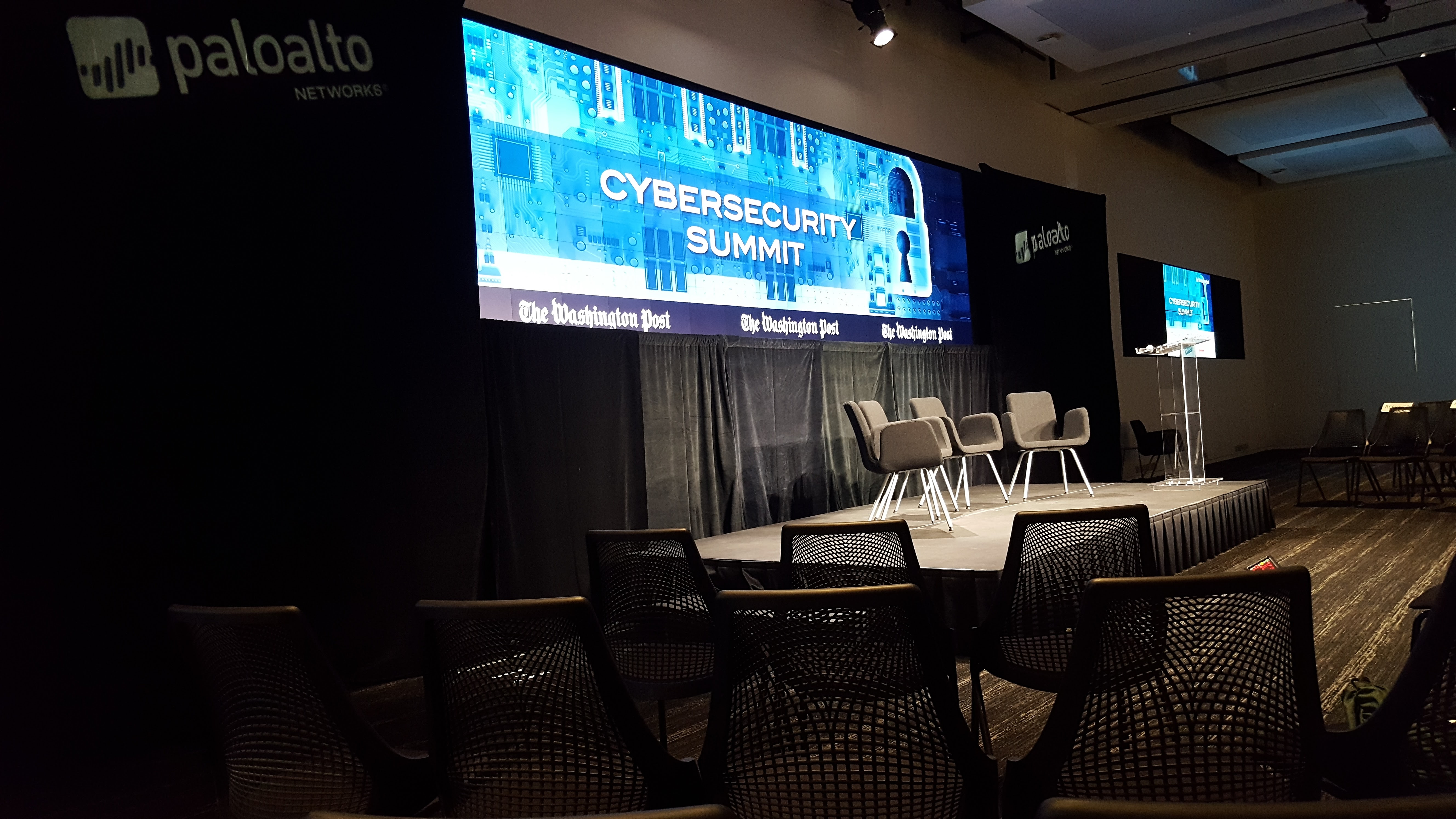 “At IntelliSyn we make a serious effort to regularly update our knowledge on a variety of technology topics. We enjoy participating at conferences like this as they help us stay on top of trends and news so our clients don’t have to—especially when it comes to security.”

IntelliSyn helps businesses in both Canada and the U.S. leverage the latest and greatest cybersecurity technology with IntelliSecure and a variety of other security solutions and services.

Contact IntelliSyn today to learn more about how your business can benefit from the latest cybersecurity practices and trends. 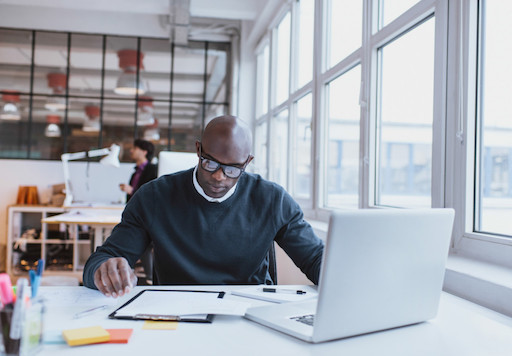 Cybersecurity is something all businesses should think about.

However, there is a perception that security measures are only available (or affordable) for bigger companies.

At a Small Business Association—Canada (SBA) event on October 27th, 2016, feature speaker Chris Stratton, CEO of IntelliSyn, will shed some light on how you can take big business security services and solutions and apply them to small business situations.

Chris will speak about how a little security can go a long way, and also address the affordability issue that so many small businesses struggle with.

More details to come soon on the SBA website. 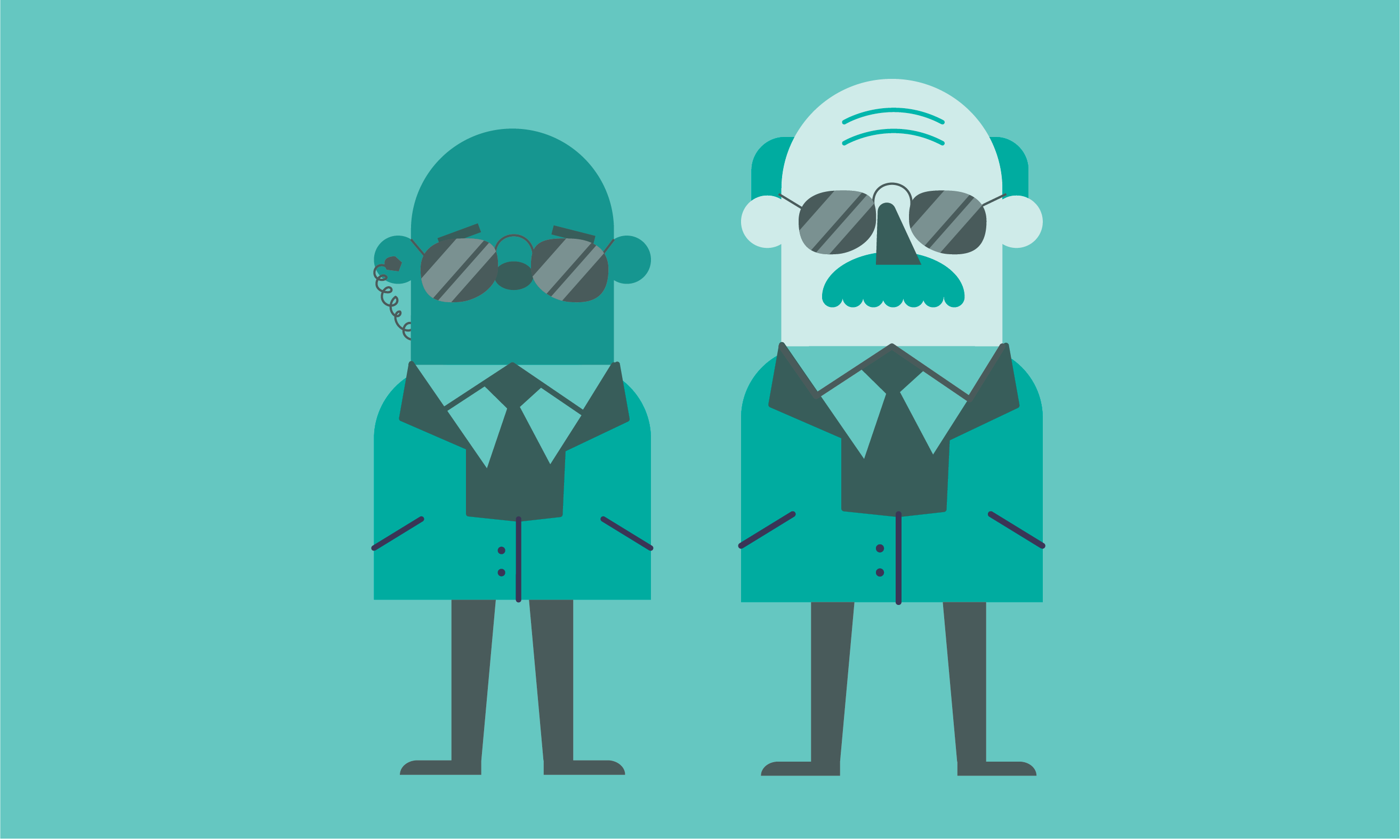 Get insights into the complex world of IT security and find out how you can protect your business from targeted malware, customer data theft, and other cybercrime cost effectively with a managed security service provider (MSSP).

Chris Stratton, CEO and President of Ottawa-based IntelliSyn, will moderate a discussion about how you can chart the best course towards leveraging MSSP services that are cost-efficient and let you focus on your business rather than IT security.

And you’ll get a chance to discuss managed IT security options with other small business owners who are considering working with an MSSP.

Register for the Event Join us on August 18th at CollabSpace for an interactive technology planning session that teaches business professionals how to reduce the time and effort put in to keeping their businesses running smoothly by leveraging the latest and greatest technology.

Unique ways of using new technology options will be introduced at the session, such as integrating web apps and VoIP (Voice Over IP) solutions to better serve customers while reducing business costs.

Ask questions and network with other business professionals on August 18th, 2016 from 4:00 p.m. to 6:00 p.m. at CollabSpace‘s headquarters, 70 Bongard avenue (off Merivale, south of Hunt Club).

And business owners get in free, complements of the event sponsor, IntelliSyn!